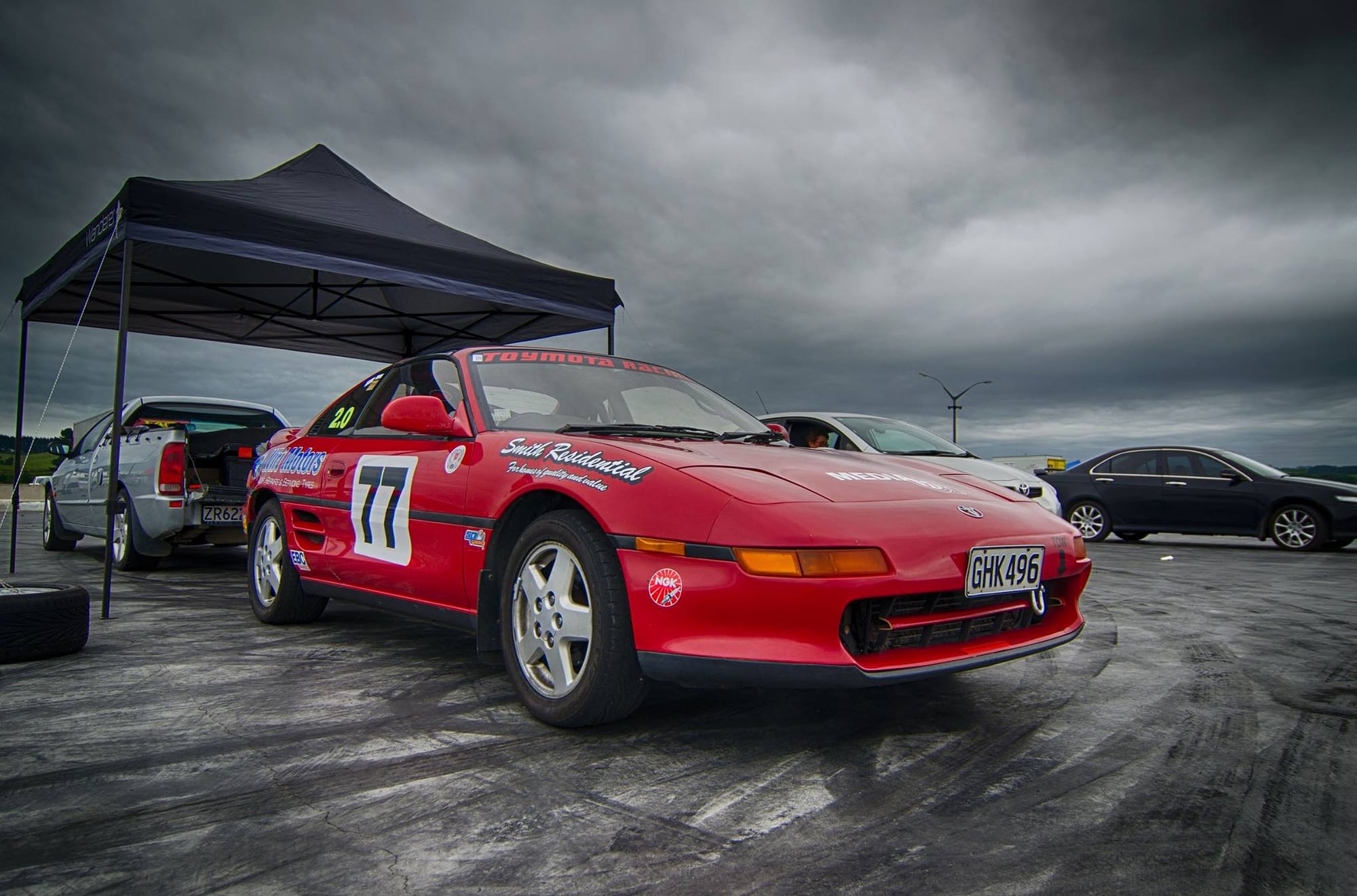 Full Round Recap Time.
The day started poorly with their being no milk, and therefore no weetbix for breakfast.
After getting through the massive queues of documentation and scrutineering, followed by drivers briefing (and the newbies briefing as I’m on the BBQ committee) it was a bit of a rush to get out for the first qualifying group. With so many competitors in the 2kcup there were 3 different groups for qualifying.
As I got ready and put the racing suit on the zip came off in my hands. This is the third time we have had to send the suit back to have the zip fixed. Thankfully Dad had bought the old suit which I ended up wearing instead.

Highlight of the day was Media77 arriving with their sticker to place proudly on our car. Super excited to have them on board as sponsors to provide epic photos throughout the season as their photos are top quality. We got super intense and measured up the spot to stick it, turned out bloody great if you ask me.

I went out for qualifying, the track wet from earlier rain. Once again I got bogged down in traffic, one guy deciding it was a good time to race me rather than let me through. The real issue with qualifying however was the problem of forgetting to put the transponder in the car, yes the lap timing thing. To make matters worse we had created a nice dry line for second qualifying group to use to easily exceed our times. In the end I was to start from 5th on the 3rd grid. It sucked to be that slow but at least I had a shot at the podium.

The race started with massive wheel spin. It had been dry for the earlier races but rained just in time for mine and I did not handle the start well. I didn’t lose position however and was eager to move on up. That wasn’t so easy while slip sliding in the wet however. Down the straight I ended up with further issues. Towards the end on the straight as I looked to overtake people the car would run out of juice and just stop accelerating, leaving me no chance. I had no idea what was happening, and am still confused now, but it only happened some laps. I tried changing into fifth some laps but that was less than ideal. After one such lack of power incident I was left a few extra car lengths away from Paul Greaney who I was chasing. In the following corners I tried extra hard to catch up, knowing I had the speed to get past him and the next two cars to move to the podium. Unfortunately pushing in the wet, in an MR2, is not advised and I ended up spinning into the sand. It was a serious spin on the 3rd corner. As it let go I put my mind straight to ensuring I didn’t get stuck and was proud to make it out relatively unscathed but completely out of the race. I was so pissed I can’t even describe it.
In the end I finished 11th.

In the second race the reverse grid meant I started from 12th, front row of the second group to start. I knew my start had to be better and I nailed it. It left me on the outside of turn one in the rain once again but I was happy to stay out there and made up a spot heading into turn 2. By the end of the lap I had caught the next group and that’s when the fun began. I knew in the wet there would be no best line for the first couple of laps so I was overtaking people round the outside, down the inside, any way possible, it was great. I made it all the way up to 3rd but the front car was way up the road. It didn’t take long for the superior cars from the back (those that had done well in the first race) to start coming through. I could see them coming slowly lap by lap. I pushed the car as hard as I could to keep them behind, sliding in the wet far too often. A few guys did manage to get past me but I was proud to keep Greaney behind and hold on to 6th after a clean race.

The other highlight of the day was of course the 2KCup BBQ. It is always great to catch up with the great people in the 2kcup and share stories of the great races we have all had.

Another days racing under my belt. Not the best racing in the wet, a number of issues throughout the day had me rather frustrated.
Unfortunately the Green Goblin didn’t make this round as the overheating issues are yet to be fixed.

Awesome pictures thanks to our good friends at Media 77, if you were at round 2 there are probably pictures of you available at www.Media77.co.nz