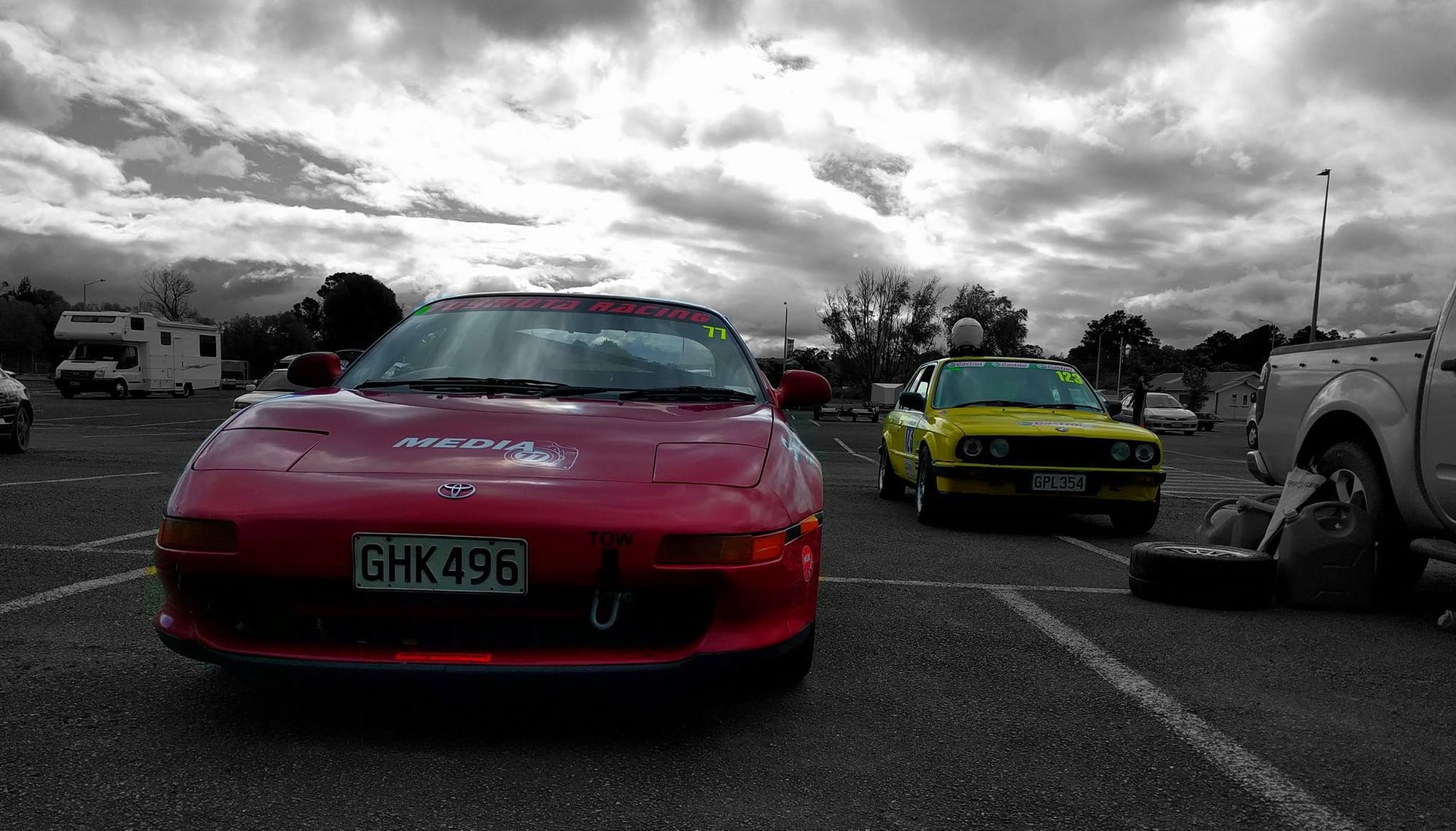 Well it certainly was a long weekend.

Thursday night we got both cars sorted and all packed so we could head off early Friday morning. Up early we convoyed down, Dad towing the Bumble Beemer, me driving the Red Dragon and Oscar joining in his Mad R2. After a long journey we arrived around midday to catch the afternoon practice. Everything was sweet except one minor detail, we had forgotten the log books. Dad was left frantically trying to sort it out as he toyed with the idea of driving all the way home to get them before Saturdays racing. Thankfully we did manage to resolve the issue and I must say a massive thanks to those that helped us with that. We did manage to get out in practice which was super helpful in learning the track before the racing the next day.

Saturday saw racing for both the 2kcup and BMW series so it was action packed. Dad, in the Red Dragon, had his qualifying first. With just enough cars for two 2kcup grids I was keen to see him in the fast (aka cheaters) grid and that’s exactly what he did, qualifying 23rd.
In my qualifying, in the Bumble Beemer, I also managed to find some clear track to put in a time I was reasonably happy with which put me 17th on a grid of 30 cars.

Dad’s first race was straight after my qualifying so I missed half of it. Dad was worried he might end up on his own in last, but that wasn’t the case at all. While I was watching he had a good race with two other guys, slowly closing in on them and eventually making the pass right near the end. He ended up 20th which was a good result.

Next up it was Dad again. This time, thanks to a few cars dropping out, the 2kcup managed to fit onto one grid. As always it was a reverse grid so Dad started off position 28. He got away to a reasonable start but a few laps in he started to struggle. The faster cars from the back caught him a bit too early and just monstered past him in a train. He dropped as low 38th before beginning his march back up in the second half of the race. He worked his way back up steadily and managed to bring the Red Dragon home in 24th, one position off achieving the goal of finishing in the top half of the 46 car grid.

Right at the end of the day it was finally my turn to race. I got a bad start but was more than happy to fight on with it. The first few laps saw a number of chances for me to get through but my own small mistakes held me back. At one point I missed a gear on the exit of the middle hair pin and paid for it down the entire straight. With the cars so even I didn’t get a chance to come back from that and ended up finishing 19th.
And that was the end of Saturday. It was weird seeing all the 2kcup crew pack up to drive home while we were preparing to come back again for more BMW racing Sunday.

My first race on Sunday was a reverse grid based on best lap times. I started 9th with a 5 second gap to the guys behind. I was looking forward to what should have been a great chance to get away but it wasn’t to be. I struggled to get past those in front and it wasn’t long before those behind began to catch up. I battle for a couple of laps, getting as high as 7th, until the scholarship car came up to make a pass. Of course I was going to push extra hard to try keep him behind. He got up the inside going around the last hairpin and I tried to hang on on the outside. He pushed me up fairly high but I kept up it running up onto the outside curb, and that was the end of it. With no grip bumping along the curb I slipped out onto the grass, which had even less grip, and lost a painful amount of time and positions. I came back on and kept racing but the damage was done. I ended up finishing 18th.

The final race of the weekend was a normal start based on points from the previous 2 races. I was starting 18th and thinking surely I had the speed to move up from there. For the third time I got a terrible start off the line, I’m still not sure what I’m doing wrong. It wasn’t going too badly for the first few laps, battling hard through every corner. Then at turn 1 I tried a move around the outside and got it completely wrong locking up and going straight ahead. Dad in the stands was on his feet thinking I would collect the wall. I managed to pull it up in the gravel, only a couple meters from the wall, and even slammed it into first in time to keep it moving and get back out. But the race was done, I was in last and miles back. I raced around and managed to make up one position before ending the race in a very disappointing 25th.

We then packed up and on Monday drove the long journey back home. Now talk about deja vu on the drive home. Frustratingly we blew a trailer tyre on the same patch of road as last year, with no spare we waited and got a replacement at the exact same tyre shop as last year.

The whole weekend was a long but fun one. Dad had good results in the 2kcup while too many mistakes left me wondering what could have been in the BMW series. But I’ll learn from it as I start to think about the next round in Taupo. The best part is, and much to Dads delight, we have two undamaged cars after the long weekends racing.