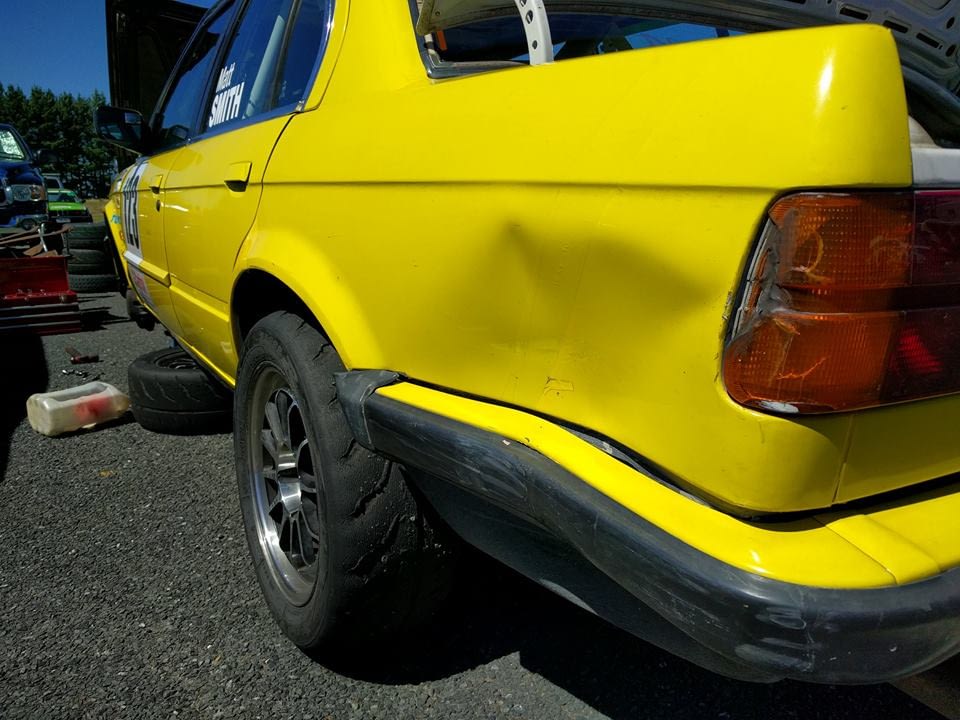 I am well and truly sick of all the argy bargy involved in track racing.

The weekend just been was the 5th round of the BMW race driver series held at Bruce McLaren Motorsport Park (in Taupo). I was really excited heading into the weekend because I like the Taupo track and have done well there in the past.

At Friday practice I had a lot of fun. The car was behaving and I was enjoying working on my own pace and trying out different lines. I wasn’t sure if I had the pace but I wasn’t too worried, I was enjoying it.

After qualifying on Saturday I was super excited. I managed to qualify 10th with a lap time that was better than any I had managed during practice.
Then Saturday afternoon brought about the first race and the driving enjoyment was quickly drained away. My start was not flash, hitting the rev limiter in 1st saw me dropping place. Into the first corner I went way out around the outside and it looked to be a good move until at the exit of the corner I was pushed off into the dirt. That cost me a lot of momentum and with that a lot of positions. I kept racing, a little frustrated but it wasn’t so bad. A few laps later however it all went to custard at turn one once again. I was putting the pressure on the car in front and went a little too hot into turn 1, then BANG I got a solid whack in the rear and spun. BANG again as I face backwards down the track and get hit in the front, watching the carnage unfold in front of me. If I was too hot into the corner the car that hit me must have gone way too hard into the corner. I let the car roll backwards off the track to get out of everyones way while I sorted myself out. I got the car going again but my race was over. I could feel something was broken as I drove back around to pit lane, ready to call it a day. I was so frustrated and upset to be knocked out of the race after qualifying so well and also now having a damaged car. But waiting there in the pits was an energised Mark Mallard. He pulled the front guard off the tyre, gave me a pep talk and sent me back out to at least finish the race. I trundled out but with the Bumble Beemer well and truly wounded I couldn’t go anywhere near my previous pace. I spent much of the remaining laps picking the best spots to get out of the way of other cars coming round to lap me.
The damage to my car wasn’t so bad compared to some of the other cars but none the less it was unnecessary.

Back in the pits after the race our attention immediately turned to working out what was broken and if it would be possible to fix it for the races on Sunday. Graham Ball came to the rescue identifying the damaged on the lower control arm and even providing a replacement and working to help swap it in. Also Shane, Hayden and Dad were there to help with the repair and then attempted alignment. With the repair done the Bumble Beemer was basically back to its original handling and we were comfortable it was in a reasonable condition to race on Sunday.

With the reverse race being based on best lap time I started the second race from 18th due to my good qualifying time. I didn’t hold much hope going into this race but who knows what could happen. Off the line I thought I got a good start but still I was a couple of car lengths back by the time I got to turn 1. I stuck with the car in front for some time, not quite close enough to make a move. Until the faster cars started coming through from behind. Going to into the far hairpin another car got up beside me. That was fine I was on the inside and pressed on through the corner. On the exit however another car decided he wanted some of the action and tried to squeeze through the middle. BANG. I was on the ripple strip on the inside so couldn’t have gone any further over when he hit me. My car stepped out sideways and scrubbed off all my speed heading onto the straight. The straight at Taupo is massive and I was cursing the whole way down as I was getting overtaken. By the end of the straight I was dead last. Not much later there was a massive incident up ahead of me at turn 4. I backed right off to avoid it and got through unscathed. But now I was even further back from the pack. As it happened Shane was one of the people caught up in the incident so bizarrely, as seems to be the case at every round, we ended up right next to each other on the track. The next few laps was some of the best racing of the whole weekend. Never mind the fact that we were battling for last position. Shane was behind me throwing everything at me while I was driving to the limit, taking defensive lines when I needed to. It was close racing with us often getting side by side, trying to claim the better line into a corner. Eventually he did complete the pass and managed to claim another point in our little rivalry. I did end up getting back up to and past a couple of slower cars to finish in 19th.

The grid for the last race of the weekend is based on points from the previous two races so I started a lowly 19th. Again off the start I felt the car wasn’t keeping up but I knew I had better lap speed than the cars around me so I was after some good overtaking action. The whole race I was either battling to overtake or pushing to catch up to someone. It was great being able to really push the car as hard as I could without having others pushing me off the road. I did manage to make some good passes and was begging for more laps at the end as I closed in on a couple more. I ended up finishing 15th.
I couldn’t match my pace from Friday and qualifying in any of the races which makes me think we didn’t completely fix the car after the first race but also probably partly due to the brakes getting worn out at a crazy rate which we will be looking into.

A huge thanks to those that helped out repairing the car. Thanks Mark Mallard for your tools and motivation. Huge thanks to Graham Ball for the replacement part and work you did. Thanks Hayden and Shane for helping with the repair. And many thanks to Dad for being there and helping out with all of it.

I was hugely disappointed and frustrated with the weekend. At the end of the day this level of motorsport is all about fun and there just isn’t enough of that anymore to justify everything else. I’m seriously thinking I might be done with racing.