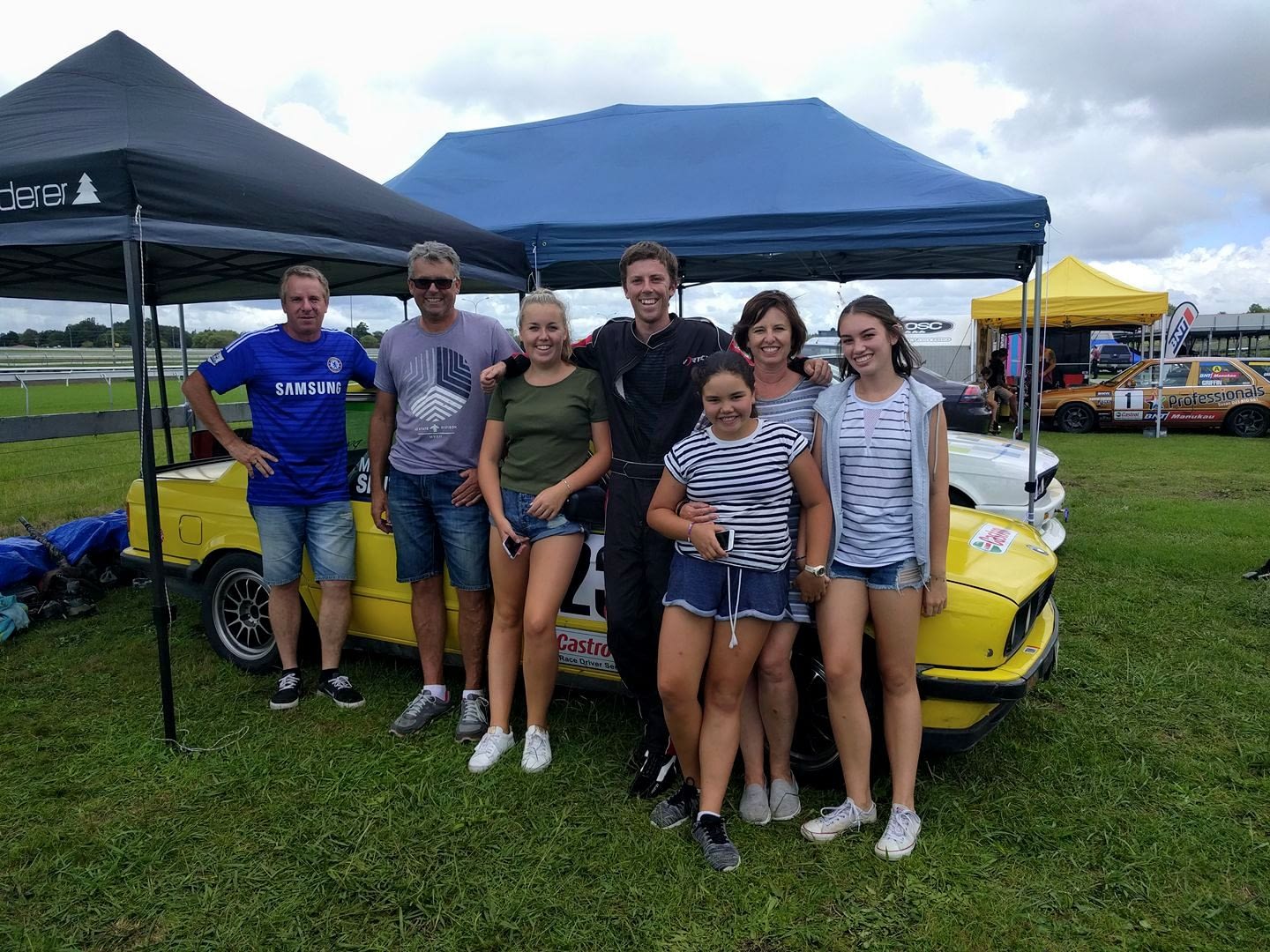 In the reverse grid I started from grid position 18 and didn’t muck around. It was action packed right from the get go as I move up and up all the way to 3rd. Super stoked to get on the podium for the first time in the Bumble Beemer

-Friday practice was awesome fun. There was only about 12 cars signed up for the day so we got plenty of track time, but to make things interesting it rained on and off all day. To start the day I had two brand new tyres which made for some slippery times until they got scrubbed in. The first session was wet and I could barely control the car on corner exit as it tried its best to spin around whenever I put my foot down. It was good fun trying to toe the line between speed and control but I must have been going super slow. As the day rolled on the tyres settled down and the weather changed around. I enjoyed adjusting to the conditions as at times each corner had a different amount of water on it. Of course Puke doesn’t have its reputation for nothing and a number of people got up close and personal with the wall or grass. I myself had a couple of off road trips but managed to keep the car in mint condition.

-The forecast was for the rain to continue through the weekend but that’s not what happened. Qualifying and the races ended up being dry. This was quite a shock for me in qualifying as the level of commitment I needed went up a few notches. It was almost like the practice from the day before went out the window as the dry conditions required a different approach. So I tightened my seatbelt and held my foot to the floor. I got faster and faster with my last lap proving to be my best and putting me in 15th on the grid, smack bang in the middle of the field.

-In the first race I didn’t get a great start. I lost a couple of spots straight away. I battled back past one over the next couple of laps. I kept pushing but I was left wishing it was a 2kcup half an hour race as I had the pace on the group of cars ahead but only caught them right at the end. I finished 16th which wasn’t too bad at all.

-Then on Sunday morning and the reverse grid. We arrived to the track and it was well wet. As the first race of the day there was a bit of guessing going on as to weather the track would dry or not. In the end I went for a dry setup after walking along the track to see how much water was around. It was a good call because it did indeed dry out by the time it finally started. I started 18th with the staggered start putting me 5 seconds behind the top ten. I knew what I had to do, quickly jump the cars immediately ahead of me so I could lead the charge to the slower front ten. With the confidence on the track from the previous two days driving that’s exactly what I did. Flying past cars on the inside and outside I quickly moved up constantly pushing to catch or overtake the next guy. Its in this race that I finished an amazing 3rd. THIRD!! I was over the moon to be on the podium for the first time in the BMW series.
Shout out to Grandad who came and watched this race. Beforehand he gave me a lucky handshake which clearly did the job as my previous best finish was 7th.

Unfortunately however that is not the whole story of that race. Towards the end as I was making my way through the field I did accidentally crash into the back of a competitor. It was my fault and I’m extremely sorry for what was me not paying enough attention and cost the other guy a couple of positions, I did go and apologise afterwards but what can you really say. Coming onto the back straight the car two in front of me got a really poor exit because of a car getting lapped. This meant the car in front of me got a good run and pulled up along side him. I however got the best exit out of us three and was looking for a way around both of them as they went side by side down the straight. I tried to got left but saw that gap closing fast. Then as we headed to the corner the car on the right slowed early so I looked to head right in front of him and go down the inside of the other car. Unfortunately it didn’t work out as planned with the car ahead of me braking straight in front of me before I could get out from behind/before I was expecting and I just plowed straight into him. Extremely sorry for the damage I caused and I sure feel stupid being on the other side of the fence after all my frustrations in previous rounds.
The other incident from the race again involved someone making a mistake coming onto the back straight. I quickly pulled right to go around it which also cost me speed but Ian was coming full pace behind me. He probably wanted to go around both of us but ended up straight into my ass which actually ended up pushing me back up to speed so I wasn’t all that mad afterwards.

Between races we then had the job of fixing up the car. I had carried on full noise during the race but we wanted to be sure there wasn’t going to be any bodywork rubbing the tyre in the final race of the weekend. Huge thanks to Dad and everyone who helped get it straight(ish) again. It turned out to be a bit of a mission with strops and slide hammers and all sorts involved. But we did get it sorted and all ready for the next race.

-The grid positions for the final race of the weekend are based on points from the previous two races and that meant I was starting all the way up in 6th. I hadn’t really had the pace to compete with the top guys all weekend but hell I was gonna give it my best shot. I got a decent start for once and slotted into 6th with a little gap behind me. Jordan (in the scholarship car) was just in front, and with his hot form recently I set my goal on keeping up with him. As it turned out putting that pressure on caused him to make a mistake and I jumped at the chance to get past. It didn’t last long however as I just didn’t have the pace to stay up there. Part of that is my driving but it was frustrating to find that part of that was the cars straight line speed. I have noticed it before that the Bumble Beemer is just lacking that little bit, maybe a car length by the end of the straight. It was frustrating coming out of the last corner, foot flat to the floor the whole way through, only to be slowly reeled in by the car behind (I actually nearly got overtaken at the finish because of this). But anyway that was only a minor thing. About halfway through the race there was a much more costly moment where the car jumped out of gear just after I changed up to third. I sat there for a good second as it revved it’s tits off before I worked out what the hell had happened. Unfortunately this cost me more spots but most frustrating was seeing Shane get past and knowing how close we are in the points. In the end I finished 11th, one spot down on the top 10 I was aiming for. I’m happy with that result, and to only get one tap in the rear during that race was also a success.

Overall a great fun weekend. Super happy with the result but also some mixed feelings involved. Cheers to those that came out and watched for adding to the good vibes, no doubt next weekend you’ll have some fun also