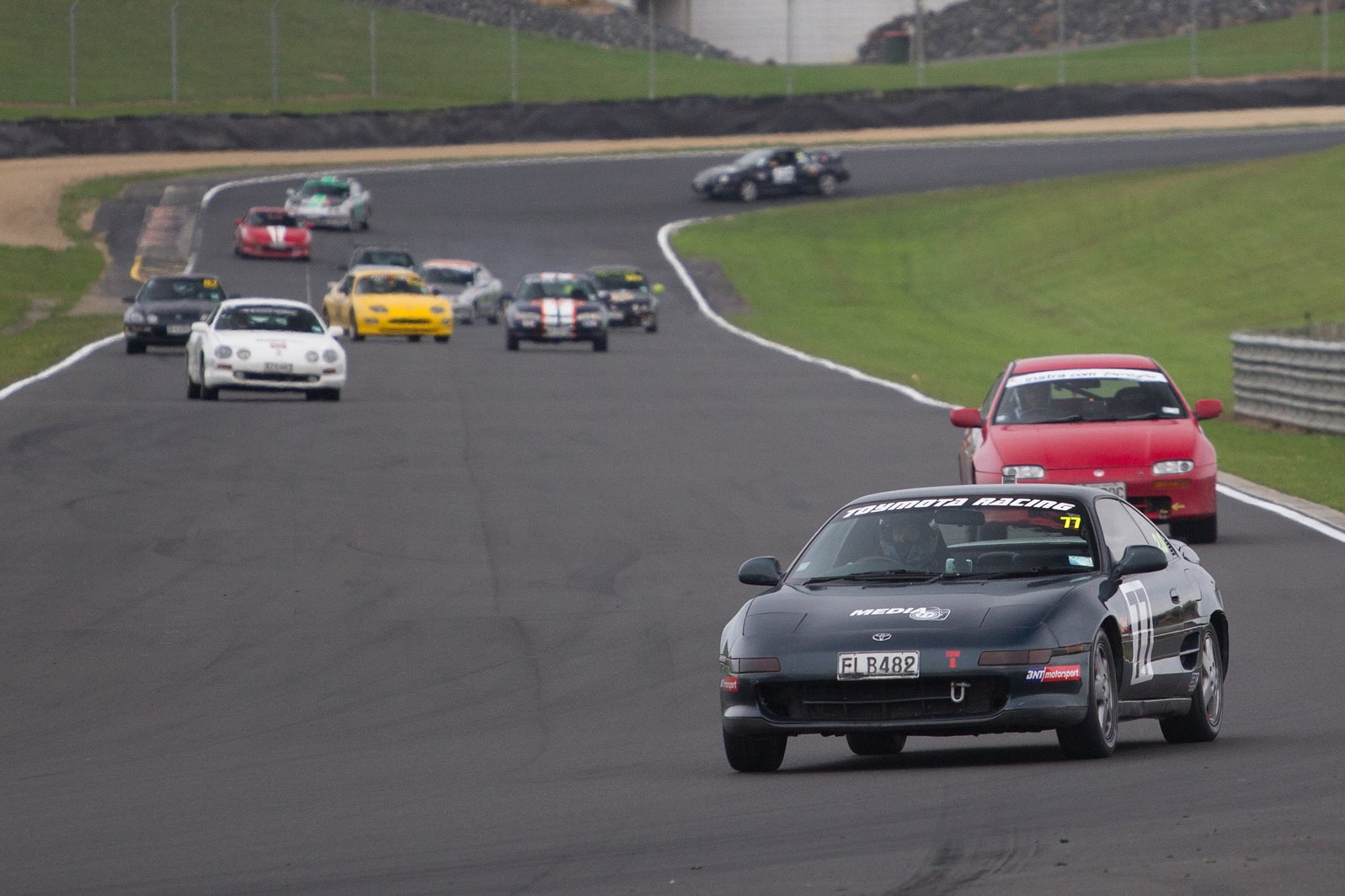 It is time for another big round review.

It was of course round 6 of the 2KCup last weekend and that meant a 1 hour race on Sunday to end the season. Dad and I shared the driving duties just like the good old days but this time it was in the Green Goblin, restickered as no. 77 (so the points counted towards my championship), we even got the Media77 sticker on there.

We were up early Sunday morning. Too early for any mothers day celebrations so that would have to wait. Expecting an early qualifying session we headed for the track, looking forward to it as always.
We got to the track early to discover we weren’t allowed the ute on the skid pan as we normally did, the big unload followed and we were set to race.
And that’s when the waiting started.
With over 300 cars entered in the various categories that were racing over the weekend there was just too much to fit in. The first sessions of the day were actually those they ran out of time for the day before and this meant it was behind schedule before it even began.
We waited and waited and waited until eventually it was time for our practice session. With the race start positions being determined from championship position the practice really was a practice rather then the normal qualifying. There was only 10 minutes however and that made for a squeeze to try and both get a chance in the car. I went out first and basically just warmed everything up. I was slow but got a good feel for the car. Knowing that Dad would complain otherwise I came in after one fast lap to switch over. I jumped out and he in for a quick practice change over like we would do in the race. Then it was his turn and he flew round the track. He smashed out a great time in the 1:24s that was the fastest MR2 and 13th overall in the session. In the end we managed to fit a reasonable go in each and were happy heading into the race.
But then more waiting.
It was hours and hours between practice and the race. In that time Mum arrived and we managed a little family mothers day celebration. Wish we could have done more, she sure deserves it.

But onto the race.
It was a reverse grid based on championship position, so sitting 27th in the championship we started 19th. There was also ten second gaps between every ten cars.
I was up first in the car. All the fast cars were behind me, and due to some people missing rounds there were some fast and some slower cars in front of me. Sitting on the start line I was surprisingly relaxed, it’s starting to feel natural after doing it for 3 seasons. Eventually all 45 cars were lined up on the grid and the lights went out.
I got a decent start, at the back of the group of ten. I tucked down the inside of turn one. Heading into turn two I wasn’t holding back. Still with the inside line I threw the car down to the apex, all sorts of screeching of locked brakes coming from the cars on those outside me (I’m sure someone must have gone off). The first few laps were awesome fun, I was overtaking cars left right and centre. But at the same time the tyres were a little slippery and I had a few moments where I had to catch it. We had set the pressures low to start with, knowing full well they would get plenty hot over the full one hour.
After the first few laps it calmed down a bit and I had the chance to set about doing good lap times. I knew Dad had one up on me in practice so I was out to prove I have the skills to back up the smack talk. The car was a rocket ship over the whole day but on the 8th lap I set the fastest time I have ever done around Hamptons, a 1:23.8. Absolutely crazy when you look how far we have come from being proud of a 1:28 in season 1. I pushed on with the blistering speed and got up to an awesome 10th. Then as people started there compulsory pit stops I moved on up as high as 7th.
But eventually it was our turn to stop so flying into the pits I came. I remember wondering how hot I could take the entry, not wanting to lose time, then coming up to the wall thinking maybe I was being too ambitious. It was all good though and I got in the pits safely. Phillipa (my sister) was there with Dad ready to time the 1 minute stop. I jumped out and Dad jumped in, just like we practiced. With the stop being one minute we had plenty of time to make sure everything was in. I think the 1 minute stop is a great rule. Then Phillipa gave the countdown and Dad was off racing.
There was still a long way to go and I have to say I was rather nervous sitting on sideline watching. He was going rather well but every lap I would cheer, “Go Dad, Go Dad!” then whisper, “please don’t spin, get to the finish”. He was going pretty well, losing a few spots but what do you expect in a reverse grid. Then the day kinda took a turn when Dad was left in the middle of a 3 car smack up. From the sideline we saw smoke from a lock up then a car spinning off. Mum was instantly panicking as if it had burst into flames or something. It wasn’t Dad who had spun but we were on high alert watching for him to come round again. And sure enough there was damage to the front of the car, and the side where the other car hit. Turns out it had bent the steering quite badly with the front wheels left facing slightly different angels. Dad soldiered on through, knowing it was my championship on the line and he wouldn’t here the end of it if he didn’t. Carrying the damage a few more cars got past after that, remarkably most of them just lapping him or unlapping themselves so he only lost a position or two.
In the end we brought it across the line in 22nd. A pretty awesome result we are proud of given nearly 90 cars entered the round.
But when Dad got out of the car we were justifiably unhappy with what had happened. To make matters worse, as we found out latter, the car that hit Dad was being lapped, so there was zero reason to aggressively turn in with two cars inside him the way he did.
It was actually really disappointing to see the amount of damage throughout the field after the race. There were a number of cars with crunched in bumpers or doors. 125 in particular had been well and truly taken out leaving his whole driver door caved in. The 2kcup is just about fun, and a chocolate fish. There is no use forcing an overtake or swerving in front of someone to claim “your racing line”. If you want to do that find a more serious series.

On the drive home we joked that we now had one car with an good engine but damaged body work, and the other car sitting at home has great body work and a blown engine. Perhaps two cars will become one in the future.

All in all it was actually a great day. Lots of fun and fast racing. Lots of fun banter with the other drivers (I told you you wouldn’t catch me Oscar 😉 ). And a personal best lap time to end the season with.
Hopefully it was enough to seal the win for one of the cups, we’ll find out at prize giving in a couple of weeks.

During the day we had someone from the BMW series promoting their scholarship car. I can’t help but think to myself, yeah I should give that another shot, I will do everything I can to keep racing no matter what the series.

I just love it more than anything.