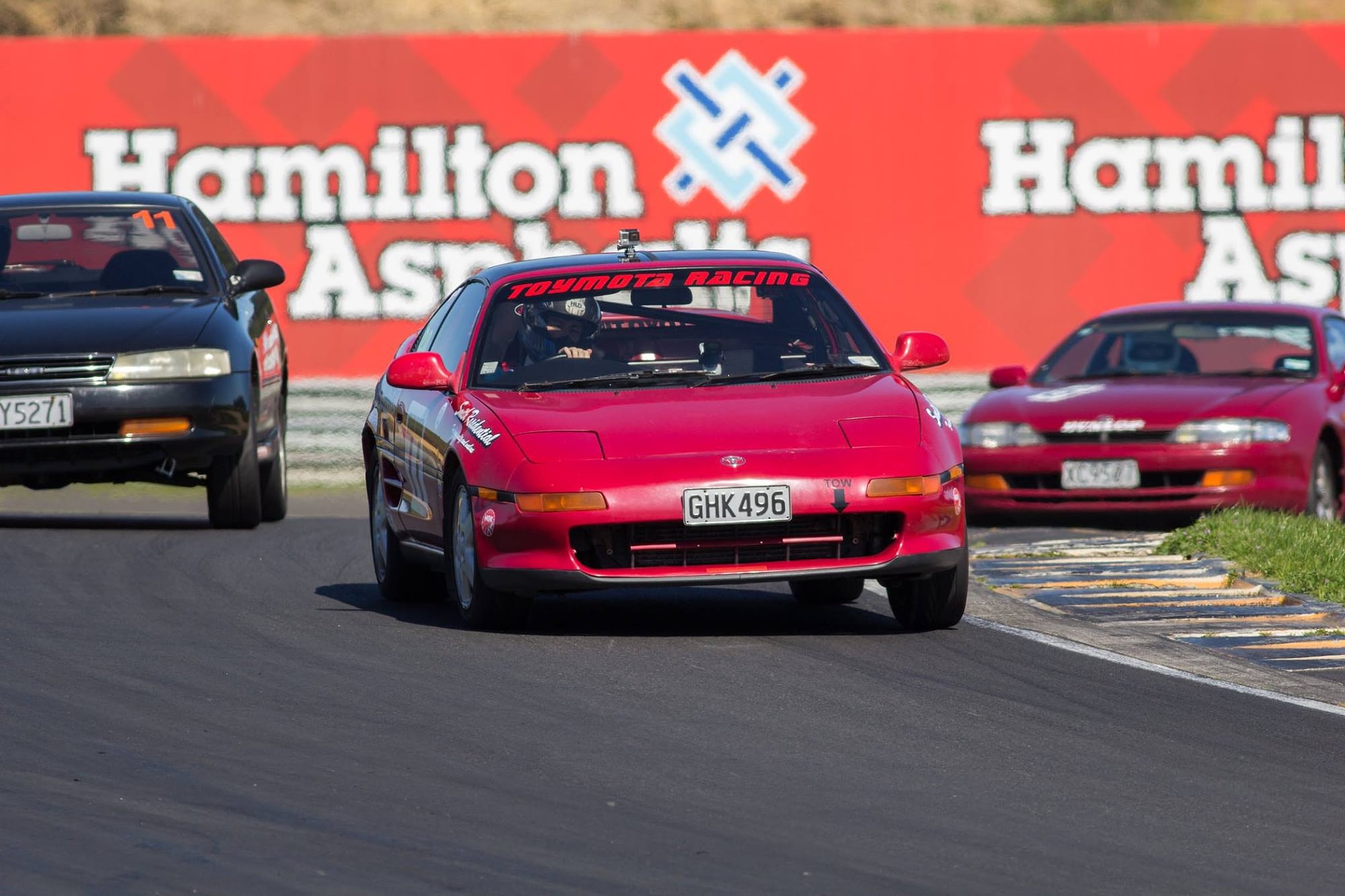 Full Round recap time.
Warning it is really long because there was a lot of great action yesterday, but read to the end because I saved my best to last.

Round 1 of Season 3 took place at Hampton Downs with a huge 92 cars entered meaning there were two completely full 46 car grids.
Dad towed the Red Dragon down (which I would be racing) on the trailer and I drove the Green Goblin in the hopes of exposing any issues that may have been unresolved from the work we did the night before. There were no problems and we turned up to a beautiful day at the track excited to get into it.
Qualify was split into three groups with Dad in the first session and me in the second. Dad went out and did a 1:26.0. Not the fastest we have done but still pretty reasonable. Given he wanted to qualify near the top of the second grid he thought this was just right. Then I was up and I was slow. I did a 1:27.7 in the end but still not really sure why the car didn’t have the same feel as a few weeks earlier. When we got the grids our qualifying had put us in it was rather surprising. Dad qualified 31st on the fast grid and I was to start from 8th in the second grid. Fair to say this cheered me up, I had a shot at a good result from there.
Oscar, who also drives an MR2, went out in qualifying and made a statement of support for the series sponsor Dunlop. It was his first time on his new Dunlop Direzzas and he set his fastest lap time ever. Looks like we need some new tyres here at Toymota.

Then it was time for the race. Dad, being in the fast group, was up first. 46 cars lined up on the grid is quite a site to be seen, and watching them all take off when the light goes green is spectacular. Dad got an amazing start when it did go green and was straight up the middle overtaking. Then on just the second lap there was a safety car, I believe to clear cones that had been knocked onto the track. When they went back racing Dad picked up where he left off and overtook someone into the first corner. The overtaking continued for a number of laps to follow and it was great watching from the side cheering him on. But unfortunately it didn’t continue and suddenly he wasn’t catching the car in front. Then he was dropping back to the cars behind. Then he was dropping like a stone, getting overtaken by cars every lap. I could work out what was going on, it wasn’t hard, the overheating issue was still plaguing the Green Goblin and Dad was just trying to look after it. Unfortunately it couldn’t last and to avoid wrecking it he came in with only a couple of laps left to race.

Then it was my turn and the pressure was now on. We had family come out to watch and Dad hadn’t put on the show they were after. Starting 8th, with 38 cars behind me, I knew a good start would set me up with a shot. I got a great start as well. The car in front of me didn’t get off too slowly but the car two ahead was really slow. This meant the car in front of me went into the middle to get around him, blocking my path, I was fast enough to gain a few spots but completely boxed in. Down to the second corner I new I had the speed to slide down the inside but was nicely blocked once again. Over the third corner I wasn’t having a bar of it and round the outside I kept my foot down. On cold tyres I skidded out wide but didn’t lift. Off onto the grass I still didn’t lift and I didn’t lose a position when I came back on either. The first few laps were close and hectic as you would expect from a massive grid. Worryingly for the first few laps the Red Dragon let out a huge cloud of smoke around the 4th corner. The first time it happened I was super concerned and a couple of cars got past as I looked back, checked my gauges and tried to assess if I should continue. But I still had power and it was only on that corner so I raced on, and now looking back it was only appropriate that the Dragon was blowing out smoke. When I kept happening in the same spot I came to the conclusion that Dad having overfilled the oil was the problem, and when it didn’t do it after the first few laps I forgot about it completely and focused on going fast. The race carried on and spread out but right up until the end I was battling another car. He got past me near the start then I fought back and got past towards the middle, then held on as he continued to be close behind applying the pressure right until the end. Towards the end there was a car in front smoking a lot. It dropped oil on the track and at the first corner I was having horrible memories of my first race when I hit oil there and spun. I was taking it super carefully, going as slow as I could while keeping the cars behind, just praying that the smoker would pull in to the pits and give me his position. Eventually he did but only after getting the mechanical black flag because his car was actually on fire due to the oil. In the end it was a solid race and a result of 7th was pretty awesome.

Then heading to the second race we were stumped as to how to fix the Green Goblin for Dad. We tried a few things, knowing that the only time we can see the problem is when driven in anger on the track, so we wanted to use the last race as a test and get our monies worth for the day. The reverse grid meant he had no chance of a good race anyway (his dnf meant he started at the back with the fastest cars ahead of him). The car wasn’t having it though and he again retired when it started to overheat. Looks like there is some serious work to be done with his car.

I was in a completely different position with the reliable Red Dragon rearing to get into another battle. The reverse grid put me back in 33rd but of course everyone in front of me was in theory slower. With 10 cars starting at a time and 10 second gap between them I had a full 30 seconds to try make up. I got off to a good start, overtaking straight away and blasting to the front of my group of 10 by the second corner. By the end of the lap I was up to the next group planning my overtaking move. After that it was constant action. Every corner there was someone in front of me that I was trying to put a move on, and someone behind me trying to follow and get past. I was carving through the field, often getting two spots at a time, constantly aware that if I didn’t get a move on the faster guys from the back would be coming through. As the race progressed there were less and less cars to pass but always someone following me trying to get past with me and hoping to get past me as well. A couple of them did but only a couple. Towards the end someone got it wrong at the last sweeper and was out wide, slightly out of control. I saw it ahead but wanted to catch the other cars so left only enough room for his car. Perhaps a bad decision because he spurred back inwards right in front of me and BANG there was very solid contact. I was pissed off at the time but after the race I went and had a chat, and with very little damage between the cars there was no reason to get mad.
In the end I finished a totally crazy awesome 11th having made up a brilliant 22 positions. That was my kind of race.

At the end of the day the famous 2KCup BBQ was on. It’s always great to have a good BBQ while standing around having a good chat with those you raced with. And at the BBQ there was a little prize giving, mostly just joke prizes for things like being a fool and dragging a cone along under your car, but I got a prize for my quality driving in the second race. Stoked.

Round 1 only served to reinforce my total love for racing.
Bring on the rest of the season.