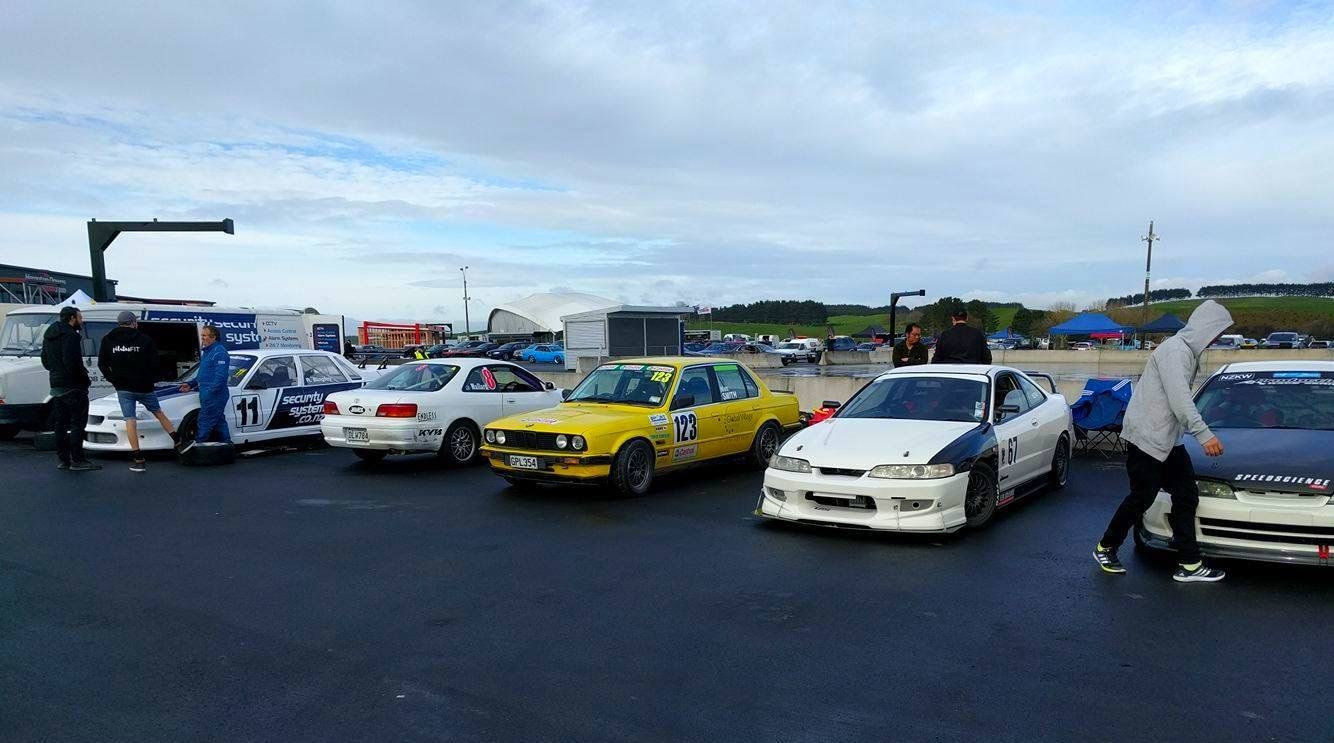 Another great race day will naturally bring with it another big recap post.

Yesterday I raced the Bumble Beemer for the first time in the Auckland Car Club – Production Race Series. I was using it as a practice day to get familiar with the car before the first round of the BMW Race Driver Series next weekend (as I can’t make the Friday practice). Driving the Bumble Beemer for the first time I was excited and nervous, I put so much money into this I sure was hoping it wouldn’t break down.

Even just driving down to Hamptons was fun. The car just feels more like a full race car, stripped out interior, loud engine, and really good brakes. Waving to other drivers I saw on the motorway also brought a smile to my face. But with Dad not attending the full day I was left to pay for petrol and dang I’m really starting to appreciate the full cost of racing, I might just be broke by the end of the season.

So anyway I did get to the track and get everything setup. The day got off to a slow start with about a million cars needing to go through scrutineering which took an age. Then after some delay it was time for qualifying, the first time I had driven the car at pace. I wanted to take it cautiously to test out the car and get familiar with the car. I was hoping to get in behind another good driver and check out their lines, but it didn’t happen. I ended up with a really slow time, a combination of it being my first drive and the traffic, but that didn’t concern me as the day was all about practicing.
After qualifying I came into the pits and had quite a scare. With the Bumble Beemer parked up someone pointed out it was leaking coolant. Five minutes of panic followed as I tried to see where it was coming from and stressed out that the car was done before I had even started. So much money and now this. But I got chatting to some people and they took a look with me, in the end we came to the conclusion it had just come out the overflow when it got too hot after coming off the track. It hadn’t used much coolant and hadn’t overheated on the track so this theory made sense. I was still worried but was at least gonna try it in the race and hope it holds together.

The production series has a different format to what I’m used to with 3 shorter races throughout the day. The first race was an 8 lapper with the start based on qualifying times. But it was a shambles with the organizers not able to cope with the big grid. They didn’t even release grids before the start and just tried to organize it all on the dummy grid. In the end they had given up trying to organize it by the time to they got to me and just told me to start at the back. While stupid it wasn’t too concerning, I just wanted to get some clear laps and get more comfortable in the car. So I started on grid 41, right at the back of the field. But when the lights went out I wasn’t mucking around. A wall of cars formed in front of me and I had the choice of where to put the car into the first corner. Down the inside I went overtaking at least 5 cars in one corner, it was awesome. But of course that didn’t last long and as the drivers of the faster cars got comfortable they zoomed off into the distance, some of them going 10 seconds a lap faster than the Bumble Beemer. I ended up behind some 2kcup cars for most of the race, not quite fast enough to get past. It really was a case of the E30 having similar pace to the 2kcup and the lap times afterwards demonstrated this. 2:25.6 was my fastest, slightly faster than when we first jumped into the MR2 way back 3 years ago. In the end, with all the DNF’s, I finished 35th. Happy to say I was in front of a couple of E30’s.
And the car held together. I was checking the temperatures every lap, and watching out the back to see if anything was leaking out, but no problems. Thank God.

Onto race 2 and this was yet another change. A 6 lap race with a handicap start based on previous lap times. Perfect I thought, I’ll be near the front. I started from grid 6, having a 5 second delay from the cars in front. But clearly race car drivers aren’t the brightest bunch and everyone around me completely screwed up the start. I was supposed to have a 10 second head start over the guys behind but they all took off before me. I was sitting there thinking what the f*** are these guys doing as they drove past. So now a few positions back, and fairly angry about it all, I was racing again. With the slower cars in front I was able to get a few passes, which is always fun, but was also getting passed by a few. Then as the end approached the real onslaught started. The difference in speed between cars in the production series is crazy. Cars just flew past down the straights, and they were more than happy to force a gap mid corner. It sure was busy but that can be a good thing in terms of getting in practice. Right at the end car #80, the scholarship car caught up to me. The car that could have been mine if only the stars had aligned that day. This car wasn’t getting passed me. I did my best in the last few corners to hold him off but as we headed up the front straight for the final time he got right up beside me. We drove up the whole straight side by side, me begging the car to go just a little faster. We crossed the line still side by side, but with the Bumble Beemer just in front, the gap only 0.03 in the end. While my lap times were a little slower than race 1 it was good practice as I adjusted my driving style a little bit to try an improve.

The third and final race of the day was another handicap start but this time a 10 lap race. Again I was near the front due to my relatively slow lap times, starting 8th. This time the start went smoother and I was straight into attacking the cars in front. It wasn’t long before I was behind another E30, car #88. I raced him for a few laps but couldn’t quite make a move stick. One time I got a good run on the exit of a corner, getting right up behind him, only to misjudge his breaking point and give him a slight tap heading into the corner. I talked to him afterwards and thankfully with no damaged caused he wasn’t too worried about it. But on with the racing and again the onslaught of faster cars came from behind. But this time they were everywhere. Frequently I was three wide going into corners, getting overtaken on both sides. Some people were getting ridiculous. Heading through turn two I had one car overtaking me on the inside and another trying to stick it out outside me. Going up over corner 3 it all went pear shaped. I saw it coming a second before but all I could do at that point was think please no. Neither car knew the other was there and they both turned in simultaneously smacking in to both sides of me. Fair to say I was rather pissed off after that incident, but the car kept going so I kept racing. I felt like I was constantly getting overtaken until I saw that car #80 in the mirror once again. No way your getting through sorry mate. It is only a friendly rivalry, but those are always the most motivating. We raced hard against each other after that, and caught #88 again. I was looking desperately for the last lap board, hoping to hold off Jordan while planning a move on the car ahead. Driving in full defence mode I managed to stick it out, keeping Jordan behind, but unable to make the pass on #88, finishing 31st. But more importantly I improved my lap times from earlier in the day, with my very best coming on the very last lap. Also, amazingly, the crash had caused little to no damage on the car. The impact was solid on both sides so I was expecting a few bent panels. Thank goodness for that given the next round is just next weekend.
Racing the other E30’s was awesome fun. I can’t wait for the series to start. But on the other hand I’m not so sure on the production series after this race, the difference of speed between the cars is just too great.

I have to say the whole day was a blast. I love driving the Bumble Beemer. It might be slower but it just feels more like a race car. Now having raced the beast I am much more comfortable going into next weekend and round 1 of the BMW Race Driver Series. Also everyone was so nice to talk to. I had great chats with a number of other drivers who offered plenty of advice and tips. Because honestly half the fun is had off the track so it’s great to see the awesome, friendly pit environment I’m familiar with from the 2kcup.

Well that’s it for this post, I’m off to work on the cars before round 1 of both series.