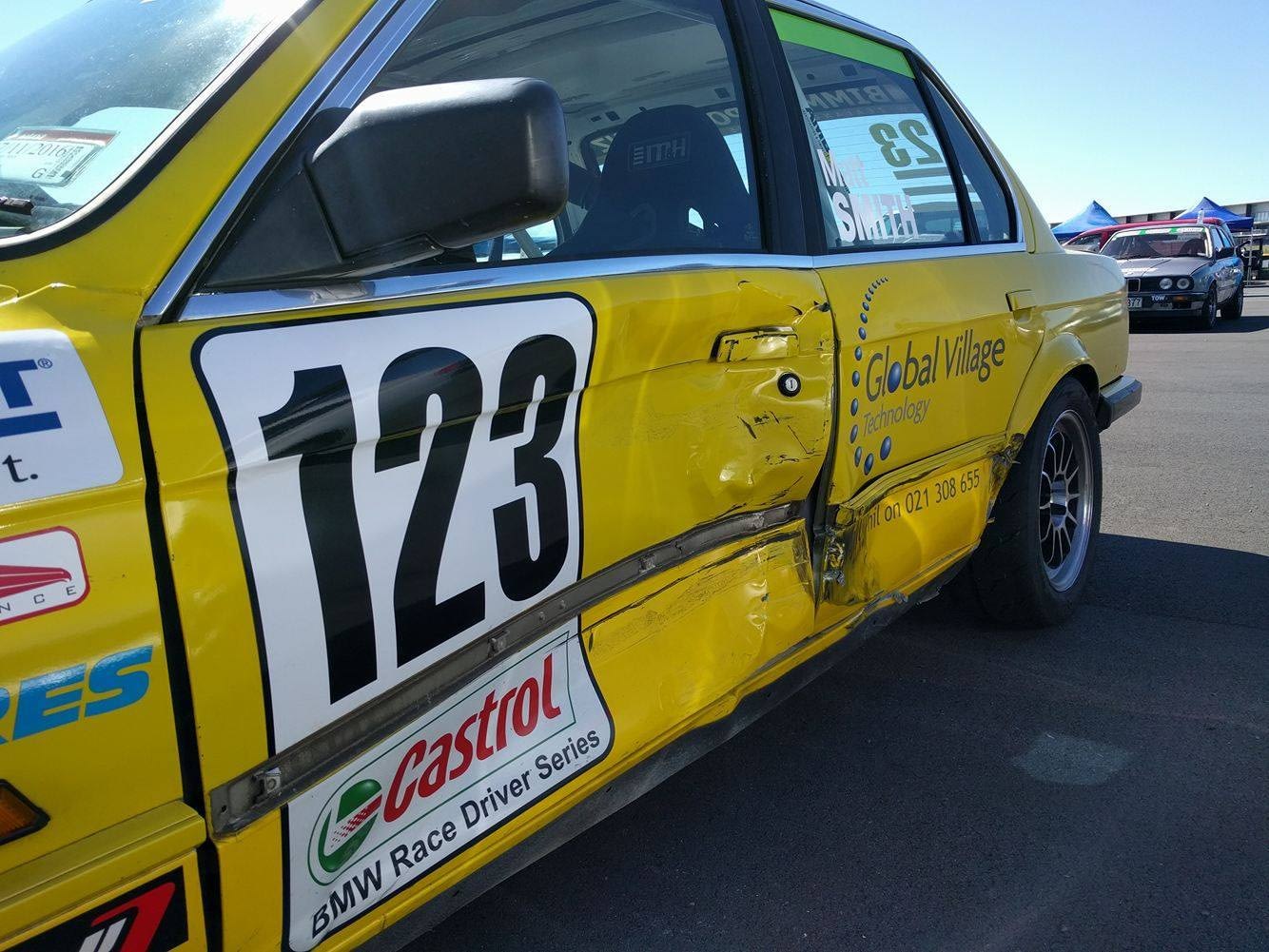 I had an action filled weekend that’s for sure.

You can see from the pictures it was mixed feelings. The short version is I was hit pretty damn bad in this mornings race but ended up with an awesome result in that race. Thankfully the car was all good and I finished both races and was able to drive it home.

So going back to qualifying on Saturday then. What an amazing clear day it was for racing. In the morning I weighed the car and sorted out how much extra I needed to put in, a completely different experience to the 2kcup. With everything sorted I went out to set a time. With more than 40 other cars trying to do the same it was fortunate I managed some reasonably clear laps to set a time close to what I had done last weekend. The time put me 29th on the grid, could be worse but could be better.

Then it was onto the first race Saturday afternoon. Again a bit different from the 2kcup with only 8 laps to make a mark. Unfortunately I couldn’t see the lights off the start so just followed everyone elses lead, which of course was a slow start for me. Into the second corner we were three wide, with me in the middle, and this position once again ended in contact for me. I was again a bit pissed but that was only very minor compared to what was to come. Anyhow, with no real drama caused I raced on. I got past a few and got passed by a few in the opening laps. Towards the end I got behind one particular car and battled him. I felt I was slightly faster and tried and tried to make a move stick. I couldn’t get it done with my most promising move blocked on the last lap, but man it was a good fun battle. I ended up finishing 31st.

Then on to the second day, Sunday. It was the first time I have done a two day race weekend and nice to not having such an early start on a race day. This first race of the day was a reverse grid. I was set to start on grid position 19, the first of the second group (with a 5 second delay to the guys in front). My start wasn’t perfect but I had clear track ahead. I was on the inside into the first corner and nailed it to pop out a car length ahead of the charging group behind me. Just the start I wanted, now it was on to chasing down the front group. It didn’t take long before I had closed the gap and even got by a few. Then disaster struck. Going round the first corner I see someone ahead has spun. I had a car on my outside who tried to go to the outside to get around the incident. I saw the car rolling back so headed for the inside. I made it past but the car next to me didn’t make it round the outside. I thought I was clear heading out the exit of the corner only to have a car coming back from the grass spear hard into my passenger side. That’s the damage shown in the picture. It was a good hit and spun me off the track. When I gathered myself up and got the car going I was left at the back of the pack. I joined the track again to see the red flags out. I spent the lap trying to test if anything on the car was broken and smashing the steering wheel in blind rage. This was not the plan at all, with Dad away on holiday I needed to drive the car home. With the race red flagged we drove around and stopped on the grid. It took some time to clean up the mess at the first corner during which we were left standing on the grid. The officials handled it really well I felt, keeping us up to date as best they could in the circumstances. It gave me time to check there was no serious issue with the car and swear a few more times. They ended up resetting the grid positions to that of the lap just before the crash which thankfully meant I got my hard earned position back. After everything I was restarting in 8th. Back into it with a safety car restart. I new the car behind was reasonably fast so I deliberately slowed him down on the start but then got caught out myself as we got up to race pace earlier than I expected. Thankfully the car held together for the rest of a high pace race. It ended up being a good race for me and I finished in 7th. Awesome. After the race there was a fair bit of damage around the pits. I counted some 6 cars with serious damage with one being completely smashed up.

The third and final race of the weekend was somewhat less eventful. The grids were originally organised on fastest lap, but after some complaints it was redone last minute. One guy ran up the dummy grid giving everyone there new positions in a very rushed affair. I was happy with the new position, 17th. Amazingly when we did go out everyone was able to get in the new position correctly. I didn’t get the cleanest start once again. The car behind me tried to come up my inside. I wanted that line but they forced their way in and had me beat down the straight. I got hounded in the first couple of laps and let a few past. But the race was a great battle and lots of fun. Thankfully I was able to keep out of trouble and the car kept going right to the end. I finished the race in 24th and managed my fastest lap yet along the way.

The whole weekend was great fun. Battling against similar cars was an awesome challenge. On the other hand it’s obviously a disaster to come away from the weekend with the car in the shape it’s in.