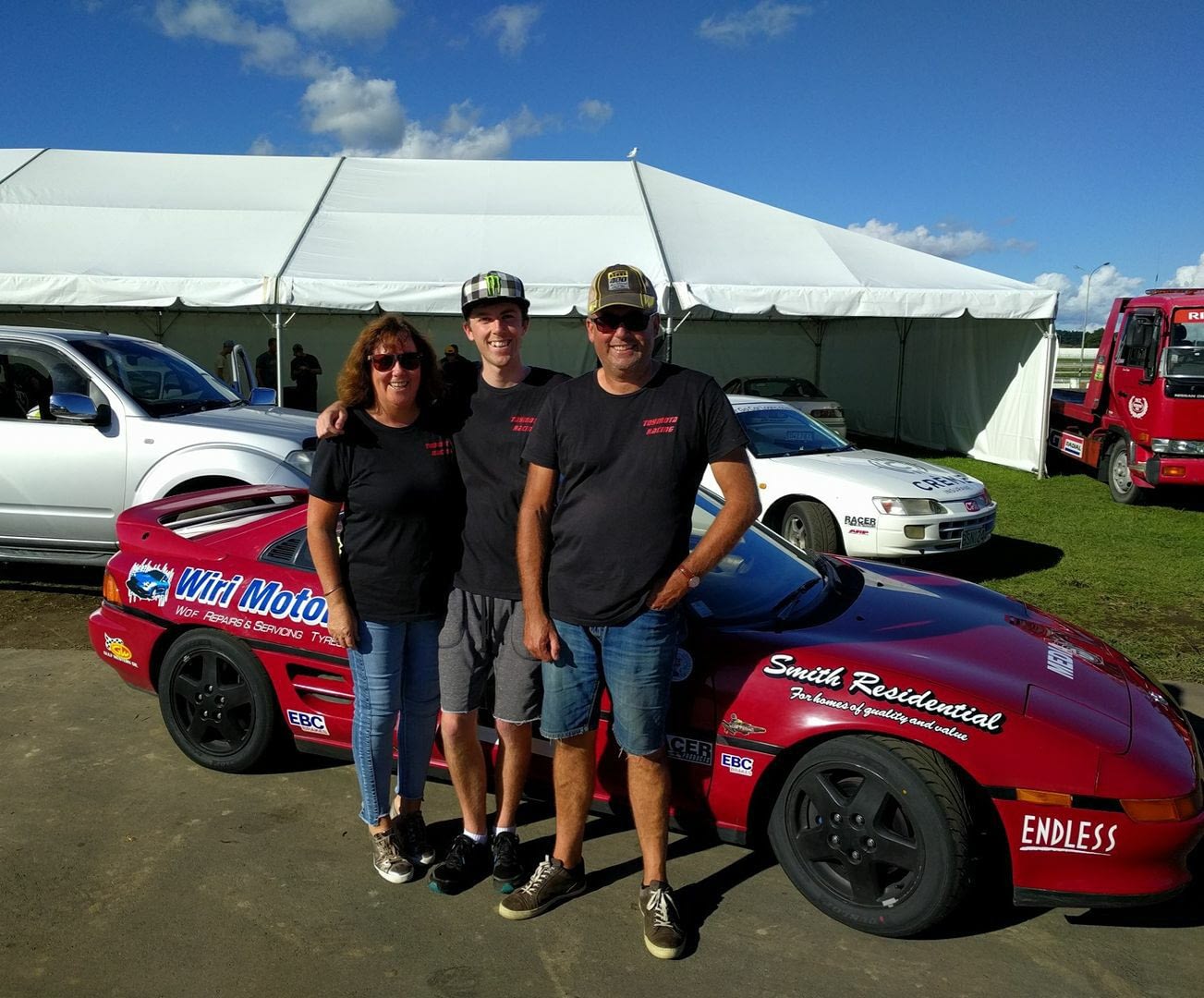 What a whirlwind weekend that ended the best way possible with me finishing 8TH! in the last race, super stoked when there are 90 2kcup cars at the meeting, it might just be the best result in that car.

Firstly I have to give a massive thanks to Dad. He did all the preparation before the meeting to make sure the car was in ship shape and now is left with unpacking after the event. Truly grateful for all you’ve done Dad.

Now buckle up cus I’m going back to the beginning of the weekend and it’s bound to be another long recap post.

Saturday morning I was on the plane up from Christchurch. Straight out to the track for the afternoon where the weather turned miserable for qualifying. It’s been a long time since I’ve been behind the wheel of the Red Dragon so to jump straight in on the most ruthless track in the very slippery wet conditions was fairly intimidating. When the session started I hadn’t even had a chance to get on track before the first crash. At the last corner someone had managed to slide off and collect the wall, mental note to take it easy on that corner. When I did get out it was immediately clear there was no grip in the rain. Steering left on the exit of right hand corners bought a smile to my face but it clearly wasn’t fast and I was battling my instincts trying to be slower getting on the gas pedal to avoid the near to spinning sideways action. Getting going I quickly felt comfortable in the car again, more comfortable than others in the conditions it seemed as I was constantly getting held up by cautious drivers in front. Particularly in the fast first and last corners I was wanting to go full commitment only to pull up to the back of another car and have to slow. Unfortunately this ment I came in at the end of the session unhappy that I wasn’t really pushing my skill but at least I was happy the speed was there once I could get going. In the end I finished 47 of 84 in qualify but that meant I was into the “not so top 10” shoot out.

Saturday night there was the 2kcup BBQ which is always a highlight chatting to all the other drivers about all the moments during qualifying and how crazy the wet conditions were. Thanks to all the sponsors that put this on including the village butcher who supplies the best sausages.

The “not so top 10 shootout.”
This was a new special event for this round at Pukekohe and saw the middle 10 drivers after qualify going into a top ten shoot out just like you would see in the V8 supercars, one lap to set the best time you can. It was an important session as it dictated weather you would start on the back of the fast grid or the front of the slow group, not to mention there was $2000 on the line for the winner (albeit nigerien dollars 😂). Such a special opportunity to have the track entirely to your self with all eyes on you while you push as hard as possible. I was wrapped to be a part of it. With the session moved to Sunday morning I was up and ready to go early. After waiting an age I finally was let out for my lap. Time to focus on the outlap and warm the brakes, pay attention to the damp spots, and test the grip levels available. Completely different conditions to the previous day, it was clear but still very damp and slippery so caution was still warranted. Into the first corner I pushed hard, too hard as it meant into turn 2 I didn’t slow it down enough and got a bit sideways, through turn 3/4 still not quite under control battling to try stop the car going full drift mode. It was a slow way to take those corners but onto the rest of the lap I was loving it. Through the hairpin I misjudged the grip and braked way too early costing me more time. Even still I came away with 4TH! an awesome result which raised me up into the fast grid! And knowing I had more speed still I was looking forward to the races

Race 1.
In a complete turn around from Saturday, Sunday turned into a nice sunny dry day which meant a dry track that was nothing like the day before.
After the shoot out I was in position 44, right at the back, but happy to be in the fast group. I drove out to the grid only to find the painted grid positions don’t go back that far 🤨 I ended up just lining up where I thought the spot should be with the cars around me just as confused. It worked out all right and when the lights went out I was off, up a few spots straight away. The first couple of laps I did my usual trick of carving through the traffic finding the gaps as cars buzzed around on all sides only to loose a few in the tight racing that followed the next couple laps. After that my race settled into a good rhythm, pushing hard to try get past and then keep ahead of those I was battling. It was going really well and I was happy to be pushing to my limit in a close battle for most of the race. As the race went on though I began to tire. I was glad to see the last lap board as by that point I was exhausted just trying to hold onto my hard earned position. The relief at seeing the last lap board quickly turned to frustration as I mucked up the gear change at turn 2 and twice put it into 5th instead of third slowing me down dramatically and letting past one of the cars I had fought so hard to stay ahead of. I got out of the car truly exhausted but happy to have worked my way up the 35th and enjoyed myself pushing the entire time.

Race 2.
A reverse grid start based on lap times (and with a few swaps between slow and fast grid) meant I was starting 5th! (still in the fast grid). I was fully in tune with the car now, the track was dry again, and I’ve had some good results in reverse grids so I had a feeling I was in for a good one. It was a very different feeling being in grid 5 for the start compared to grid 44 but when the flag dropped I went for it all the same. Right off the start I was moving up again. Quickly into 3rd I was keen to push and try get a gap before the faster cars behind started closing in. I was driving to the limit, bouncing round the track sticking right on the car in front looking for that opening to get through. Another lap passed and then another as I kept going at it looking for an opening or weak spot I could take advantage of. It went on for lap after lap and I was loving it. Testing my skill against a slightly faster car, the gap opening and closing as we each had our own strong points but never getting further than a few car lengths behind. I managed to get along side a couple of times but unable to make the move stick I’d be left with a prime view of his bumper yet again. As the race went on a couple of the faster guys did start coming through. I didn’t make it too easy on anyone but if they powered past me down the straight there was nothing I could do. It was one of these faster cars coming through that provided me with just the opportunity I had been waiting for. The faster car came down the inside at turn one, going past me and going two wide with the car in front I had been battling all race. I saw what was happening, it had happened in race one just the same, so I tucked in behind the faster car and knowing I had been strong at turn two all race I finally made my move and got the position I had been fighting so hard for. As the race progressed the inevitable 2kcup unreliability hit a couple of cars and called for a safety car. I was actually glad for a bit of a break as I was exhausted yet again. At this point Rooney had managed to work his way up behind me so I knew the restart was crucial as he can pedal that wagen far better than common logic suggests should be possible. I kept focus and got the start I needed, keeping him at bay and resuming my push to get everything out of the car. Only a couple laps later a car just ahead of me was slow out of turn 4, I had a car to my right so I careful and quickly navigated around him, looking in the mirror and a cloud of smoke coming from the slow car. And by the end of the lap the red flags were out and the car had caught fire and bought an end to the race. I was wrapped, an awesome result to hold off most of the fast guys and bring the car home in EIGHTH out of 90. But the real reason I was smiling ear to ear was not the result but the fun of the race, battling hard the entire time, squeezing the maximum out of my own abilities and finding ways to get faster as the race progressed.

Pukekohe is such and amazing track to race at. It rewards bravery and fearlessness going flat out over the bumps, sliding right up to the edge of the road with walls threatening all around, and maxing out the cars top speed by the end of the front straight. But watch out because over step the mark and Puke will bite as a few people found out over the weekend.

As I write this I’m already on my flight back to Christchurch. So again thanks to Dad who’s left to unpack, he took all the work out of the weekend for me and didn’t even drive himself. Thanks also to Mum for the baking and Pip for coming out in support, it was awesome having you all there. As always thanks to all the other 2kcup drivers that make it an awesome series driving hard but fair for the full 2000 seconds every time. And a huge thanks is reserved for all the volunteers that make the event happen, what you do is awesome.

I can’t wait to be back for some more racing