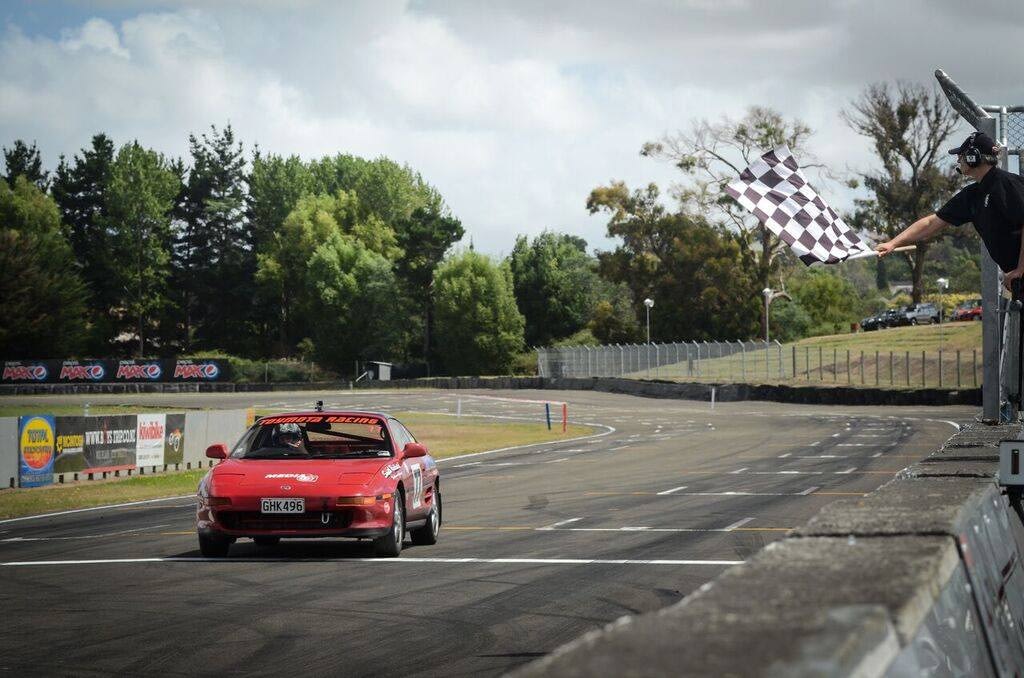 It’s full round recap time once again so brace yourself for a big post to go with a big weekend.

There is only one way to start this recap and that is to say a huge thanks to Dad for everything he did around this weekend. He didn’t want to risk taking the Green Goblin all the way to Manfeild just for it to break so instead played every part in the team except driver. He prepared/packed, drove down to the track, spent the two days as my mechanic, then drove us all the way back, a legendary effort. Thanks.

Now onto the racing.
We drove to Taupo after work on Thursday, arriving about 10:30pm then got up bright and early Friday morning to complete the long journey to Fielding and take part in the practice day.

Friday practice started off in miserable weather. It was heavy rain for the first couple of sessions and it actually crossed our minds that they may call off the practice because it was too wet. We got ourselves a garage and Oscar parked in the one next to us, so it was awesome to have the two red MR2’s sitting together waiting for a battle on track. As the day wore on the weather got better and better and we got to test the track in all possible conditions. By the end of the day it was a clear blue sky with a dry hot track perfect for setting fast times. Oscar and I would head out into the practices together and had very similar lap times throughout the day as we pushed each other to get faster and faster in the drying conditions. It was a huge amount of fun getting onto a track I have only driven once, back in the first season, and trying to learn the lines and get as fast as possible. As you might expect I have come a long way since the first season and beat my best lap time from back then with ease, ending up over 2 seconds faster than it.

QUALIFYING
Onto race day and we were back in the garage next to Oscar, with constant banter about who would win our little MR2 battle. We were looking to the sky a lot as the weather had not cleared up as much as had been forecast, would it rain or stay dry?
Qualifying was more interesting than usual with there being two groups, in different sessions that drivers could choose between (except the top ten in the championship had to go in group 2). After a team discussion my faithful pit crew (Dad) convinced me to go in group one and it was a great call (thanks again). For group one the track remained dry, and surprisingly I got some space to go out and set a great time that I was stoked with, only 0.3 off the best I did in practice the day before. There was only one issue with qualify and that was on the last lap. I saw the flashing green lights to indicate it was the last lap and thought to myself “right, I know I can go faster so lets put everything into this last lap”. I had my phone in the car showing the lap times so half way through I knew I was already 0.3 better than my best. Unfortunately some other drivers had decided they would come in that lap and so were driving really slow, they didn’t bother to look around and get out of my way so in the last corner I had a completely compromised line which threw my lap out the window. One lap of traffic was a lot better than I have done in previously rounds so I was really happy coming out of that session. Then I went to watch group 2 qualify and low and behold it starts raining. We made the right strategy call after all. In the end my qualifying was good enough to put me 21st, up with the fast boys on the first grid, an amazing result in the Red Dragon.

RACE 1
Oscar came out of qualifying with a lap time only 0.1 faster than my own so the battle was on with him starting the race right in front of me. It was clear that all the cars in front were just faster cars so I didn’t have much chance, but that didn’t matter in the slightest, it was all about beating Oscar in his MR2 and enjoying the extra points of being on the top grid.
And man was it a good battle.
I managed to get past him and a few others in the early laps, but as the field spread they came right back at me with passion. The fight was on and it was incredibly enjoyable. For laps I was holding off Oscar with everything I had, smiling the whole time. I was totally gutted when he did manage to sneak past after I missed a gear. A mistake all my own fault that had me kicking myself for the rest of the race. But the race still had plenty of time so I got stuck into attacking straight away. Lap after lap I chased him throwing everything I had at it. Twice I managed to get right up behind him only to cock up and miss a gear, giving myself the hard task of catching up from 50 meters further back down the road. I did catch up though and two laps in a row Oscar locked up into the same hairpin giving me the chance to get along side him, leading to a side by side battle for the following two corners. It truly was to the most amazing battle that raged on for the entire 33 minutes, ending with me crossing the line in 19th, within a second of Oscar in 18th just ahead of me. I think it was the most fun I have ever had in a race, and we were racing in last on the track.

Between races Dad continued to go full legend and went out to buy buns and lettuce etc for everyone at the 2KCup BBQ. The BBQs are always great on race day with a chance to eat some great food and have a chat with the other friendly drivers.

RACE 2
In race 2 it was the usual reverse grid but this time they joined the two grids together (due to some broken cars not making the second race, and for some increased awesome). Strangely it worked out that even with the reverse grid I started in position 19, were I had finished race 1, but with all the cars from the slower group in front of me. 19th meant I was starting on the second flag drop and with Oscar literally right next to me I was gunning for a good start. Unfortunately the marshals got it all wrong and completely muffed up the start. Apparently they didn’t realize we were starting in groups of ten so got really confused when the lights went out and only ten cars raced off (actually some cars behind me cocked up and started at the wrong time). The marshals then turned on the red lights, indicating the race was stopped, only to wait 20 seconds and turn them off again seemingly indicating for the second group to start. I, like some others, was caught completely unawares and got a terrible start as a result. But the race went on and I focused on getting some overtakes, and as in any reverse grid it was a big bundle of fun cutting past the cars ahead that were slightly slower. At one point we had 3 red MR2s all next to each other, and at one point I was in the lead of this group of MR2s. It was a hugely fun battle that lasted quite a few laps but in the end saw me get overtaken. As the race went on the faster cars from the back started coming through and it was super depressing to get overtaken on the straights by these cars that simply had more power. I maintain that they only got past on straights, not corners, because they had faster cars not faster drivers.
Probably half way through the race it started to go a little wrong for me. The Red Dragon developed a miss at the end of the straights that we had previously only seen on wet days (so we thought it was a water issue). This cost me a small chunk of time whenever it happened, which weirdly wasn’t consistent at all. I started losing out a little and slowly dropped back from people I would normally keep up with. When Dave Rooney caught up to me and started waving and flashing his lights as he got past in his wagon (wtf is that wagon doing getting past me 😛 ) I started to be concerned that my driving wasn’t very good (turns out that’s not the case). In the end I finished 22nd, slightly gutted I hadn’t put up more of a fight against the last car that got past as I hadn’t realised it was the last lap. 22nd was still a great result though in a field of 40 something with a car that I was pushing to the absolute limit.

After the race we wanted to get a move on fairly quick to start on our massive journey back to Auckland. As we were putting the car on the trailer Chris (404) came up to us with a plea for help. His car had broken down in the first race and he had no way of getting it home to Auckland despite his best effort to call around. Of course we took our car off and put his car on our trailer, giving him the keys to the MR2 to drive home (we are the spirit cup holder after all).
Little did we know the MR2s brakes were completely rooted, with literally nothing left of the front pads. Thankfully Chris had his s*** in order and managed to sort it out with some crapper pads that were enough to get him to Auckland. I was just silently happy that it wasn’t my driving that cost me in the second race, and actually I must have driven super well to go so fast without brakes (although we will be sure to check them next time).
Anyway off we went with car 404 on the trailer, and if you’ve seen my last post you know what happened next. I explained in a comment on that post what happened but just know we were super concerned about driving with only 3 wheels. We mulled over how bad it might be if we ended up stuck on the desert road for the night, or if another tyre blew and sent us crashing off the road. In the end it was a slow, careful drive the short distance to Waiouru and a long long wait for the mechanic to come fix us up with a new tyre but once it was sorted it was a clear trip home. Dad, still in his legendary state, drove the entire way, a trip that lasted from about 6pm to 2:30am. Thanks again.

But we did make it home safely and looking back on it now it was a bloody good weekend. Some awesome fun racing with results I am really proud of.