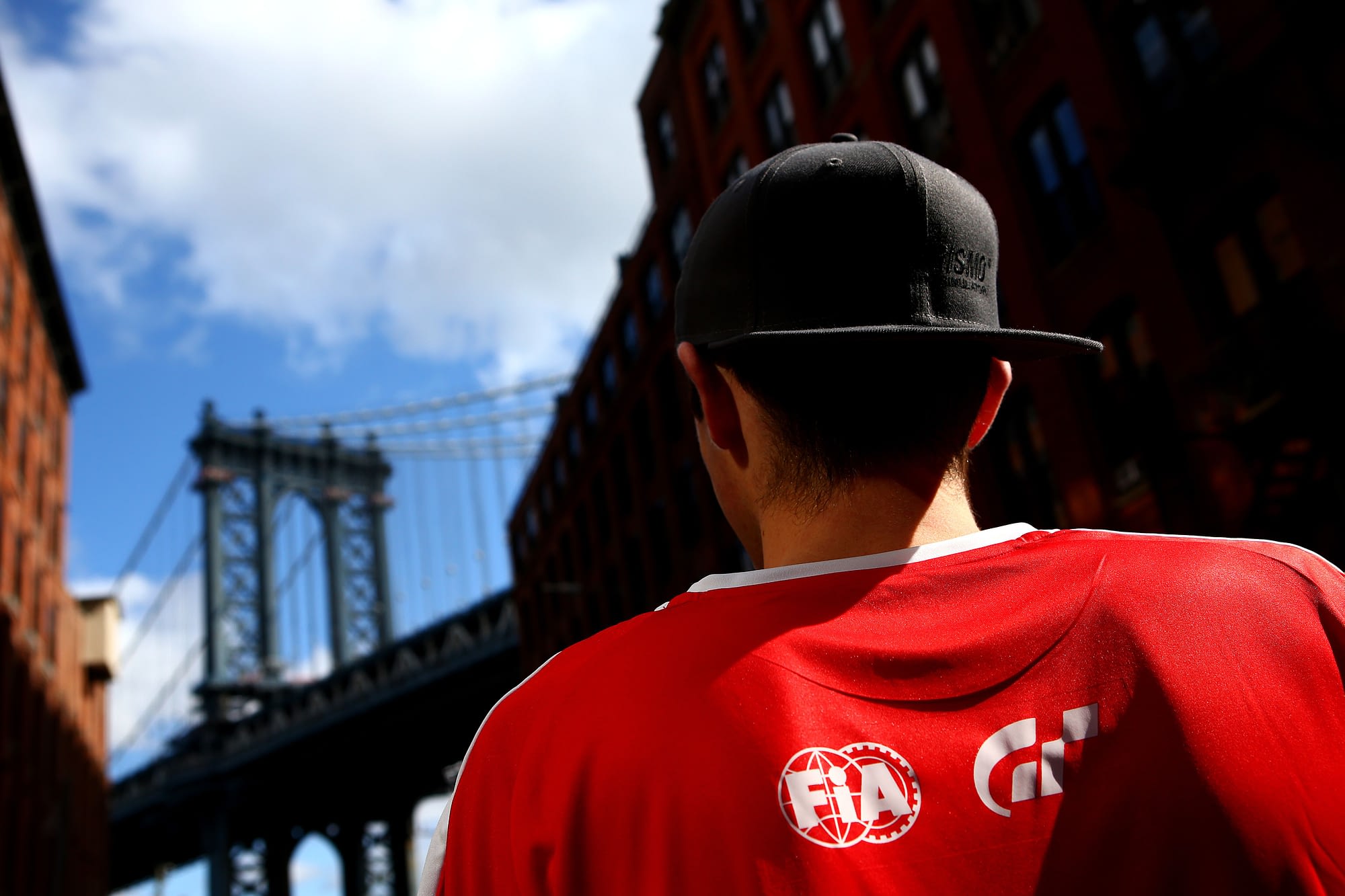 What a truly unforgettable experience the New York World Tour was. There is no expense spared on these Gran Turismo events and I’m just blown away that I got to have the trip of a life time without paying a cent. The racing was pretty awesome too.

I can’t express in words how awesome the time I had in New York was but I think the photos below will help tell the story. It was epic!

Flying over was a massive journey but I was grateful to have an isle seat on the plane with no one beside me. Once we arrived and travelled to the terminal where we were meeting we were greeted by a big Gran Turismo sign and a private bus trip to the hotel. With most of the Oceania boys arriving that Wednesday we went straight to Times Square, only two minutes walk from the hotel, to check it all out by night.

Day one and the Oceania boys made our way to another iconic New York spot, Central Park. I knew it was big going in but after 15 minutes walking when we came up to a map I took a second to work out we weren’t nearly reaching the end, we were in fact only just a small way in. After that it was back to Times Square followed by the big cameras of the media crew filming us. Feeling like a superstar we headed back and it was time for photo sessions, including photos in a race suit which was a bit different.

On Friday it was finally time for some racing, or at least it was a chance to get on the rigs as Friday was practice and qualifying day. The venue in the playstation theatre was awesome and as always the rigs were kitted out with the best of the best gear. It took me some time to get settled in during my practice session but at the end of it all I was happy with how team Volkswagen was looking. Into qualifying and it was Thomas Leonhart who would represent VW. Straight off the bat he set an epic lap faster than anything we’d seen before. With us super excited the session continued as we learnt that the slight difference in physics between the event version of the game and the version we all play at home meant everyone was going faster. In the end we qualified 10th.

Friday night saw us out for a dinner on the Hudson on a wicked boat trip. There were breath taking views of the New York skyline and the statue of liberty as the sun was setting. A surreal experience to be partying it up surrounded by the best Gran Turismo drivers in the world, the creators of the game, and famous sim racing content creators such as Jimmy Broadbent.

Saturday was race day for the Manufacturers Series. I knew going into the event we didn’t have the car to win it at team Volkswagen but never the less I was going to be pushing for the best result I could. The format was one race for each of the teams three drivers, then the final race we all did one stint each.

Race one was over to Kosuke Nishimura who did an absolutely smashing job going from 10th to 5th at Blue Moon Bay Infield ( a Gran Turismo original track).

Race number two and I was up. Two turns into the Lago Maggiore race and my fate was sealed. The tight nit field lead to contact between me and the Jaguar which ended up spinning. I was trying to get out of the way but ended up picking up a penalty which dropped me to the back of the field. After doing what I could to recover I ended up 10th.

Race three and Thomas Leonhart was in the car at Fuji. Again the tighter rolling starts would lead to trouble as everyone slowed up for the tight first corner. Leonhart saw an opportunity to try it around the outside of two other cars. Unfortunately that’s when a driver behind made a mistake, hitting one of those cars Leonhart was going around with the end of the chain reaction seeing Leanhart fired off track. With it all to do from the back Leonhart battled on in the Beetle but with the level of competition at these events it’s never going to be easy from there. He ended up finishing 10th.

The big final race of the series. All three drivers, all three different compound of tyres, 25 laps of Interlagos. I was in for the first stint on hard tyres. I got a terrible start changing gears at completely the wrong time and was straight away losing out. The Hyundai approached behind me and I chose not to fight it, there had been enough drama at turn 1 so far in the series. The Hyundai fired up the inside straight into the cars in front of me, pushing them wide. Thank you very much I thought as I slipped down the inside past them and set about racing. After a few laps the race started to settle down a little bit as I concentrated on keeping close to the cars in front. I knew the Porsche in front of us was on medium tyres so if I could keep it clean and stay close enough behind we could come back at them later in the race. I did just that and at the end of lap 7 I was in the pits and out of the car for Nishimura to take on the middle of the race with medium tyres. He was awesome setting quick lap after quick lap although it was a little bit hard to gauge how it was going to shake out with everyone being on different strategies. On lap 17 he came in and Leonhart took over for the final part of the race on soft tyres. He came out of the pits in 10th with a bit of a gap to close down but with the best tyres of anyone. Instantly he was flying, setting epic lap times. Those in front of him weren’t doing that, they were battling tooth and nail for position, slowing each other down. There was a big battle pack between 4 or 5 odd cars, and Leonhart caught up to add another to the mix. The excitement and tension was high in the Playstation Theatre as we watched the action unfold. It was close racing in the battle pack and it was great driving from Leonhart as he made his way up to 6th with a couple laps to go. Coming over the line to start the final lap he was right in behind the Jag. I was on the edge of my seat as he tried to find a way past. Out of the final corner it was a nice tidy exit, he used the slip stream then was quickly to the inside of the full throttle run up the hill. Drawing level as they approached the finish line and crossing it just a fraction ahead to put the Volkswagen inside to the top 5!!! WOOOOHOOOO celebration time as we ran up to him, hugging and jumping for joy as a team. A top 5 result for VW, and to do it right on the line like that, it felt like a win. A moment I will never forget.

Saturday night a few of us decided to ditch the prescribed schedule and head to Metlife Stadium to watch a game of American Football. It was another awesome experience, once we got past the ticket dramas, in such a massive stadium with a whole lot of barbecues going on in the car park. I couldn’t even tell you what teams were playing because I know nothing about American Football but I sure did enjoy getting a taste of America in a way I might never have another chance to.

Sunday morning a selection of drivers (that weren’t part of the nations cup) got to head out to Brooklyn bridge with media crew in tow for more filming. It was so epic to get photos in the classic spot in Dumbo, a spot that is one of the scapes locations in the game. I even got to feel like a model as I was asked to pose individually for photos. Then onto the bridge itself and it was a popular walk for good reason. Again getting epic views of the New York skyline it was an epic spot. We did some team interviews on top of the bridge and had some good laughs before it was time to head back to the Playstation Theatre.

Sunday was race day for the Nations Cup. As I wasn’t racing it was a chance to watch all the drama unfold as the best drivers in the world went head to head once again, and boy was there drama. The nations cup format always seems to throw in weird combinations and they produced some hectic racing. The Gr.B race was a thrill ride as the back and forth for positions went on right down to the end. The Super Formula race a Blue Moon (a.k.a. the fake Indy 500 race) was exactly as wild as expected with the slipstream keeping all 12 drivers in contention right down to the final lap. Then of course the grand final with two defining moments. First Cody taking out Miyazono and robbing us of the dramatic conclusion to a brave alternate strategy. Then the shady tactics of Igor Fraga helping him to victory with Hizal absolutely livid to finish 2nd as a result. It was a crazy atmosphere after that with everyone stunned at what poster boy Fraga was capable of. It sure sets up an interesting rivalry heading into future world tour events.

After all the racing was complete it was time for the famous Gran Turismo after party. The venue? A rooftop bar in the middle of New York. So epic and crazy to be on the beers dancing it up with all these epic drivers and crew, famous names like SuperGT and Matt Gallagher (both of which are absolute legends), and with Lenny Ibizarri as DJ (creator of a lot of the Gran Turismo music), in such an unbelievable location.

Monday morning and it was sadly time to begin the long journey home but not before a short trip to ground zero. We didn’t get the chance to go into the museum, I’m told it’s an emotional experience, but just being there at the memorial site, the site of such horrendous events, it really struck home how lucky I was to be on such a trip.

An epic trip with a million different moments that I will never forget.